The time to update the LXDE main session manager has come. Again, no new features but bugs fixing, and some translations updates, of course. We all hope it’s better than previous one was.
New release tarball download link:
lxsession-0.5.5.tar.xz – SHA1:
93f495f3afff0300de3c7b9aacce0ef29eb86bab

Last month a big update have happened but lasted unannounced until now, being forgotten. But at least it isn’t forgotten forever. So… version 0.10.0 was released. You may think, if second number changes that would mean there were some improvements made. And you are completely right, there are few! First of all, weather plugin was reworked and uses another weather provider, that was needed since Yahoo! Weather disabled their free support, so OpenWeatherMap is used now as we get in agreement with them about open-source plan, and support for some other provider may be added later, and BTW, feel free to add it. Also pager plugin was a bit improved to support scroll wheel over it.

In near the same time there were few minor updates for other LXDE applications such as LXSession, LXRandr and LXTask. Not much changes though, only bug fixes and translations updates.

Long time no releases came to the session manager of LXDE. Don’t think we have forgotten you, it was just some bugs were too nasty to be hasty to release. And since now it became more stable, we can present you next release. We all hope it’s better than previous one was.
New release tarball download link:
lxsession-0.5.3.tar.xz – SHA1: 10dd675ce28167abb1c1e9fff370686878807db2

After next round of bugfixes next version of LXDE session manager finally came to the release time. We all hope it is more stable and bugless now.
New release tarball download link:
lxsession-0.5.2.tar.xz – SHA1: 00d45cccbdd6fb05c46998671a7c12123a0a2179 END_OF_DOCUMENT_TOKEN_TO_BE_REPLACED

The most noticeable changes since previous stable release 0.4.6.1 (see git log for details):

So we had a very ugly crash bug in LXSession 0.4.6, that is fixed but we know that the fix is not complete and there will be a proper 0.4.7 release as soon as possible. This version is at least usable.

New week and time for an update regarding the translations for LXDE. During the last week some more users have started the translations in Pootle and by all means have delivered. Significant changes are noted in Danish that are 100% complete by now, good work!

If you are new to Pootle and/or translation in general take a look at the crash course at the LXDE wiki and then go grab some strings. Just some spare minutes are needed to make some languages 100% complete, others could benefit a great deal from just some minutes of work and that coul add up to a complete translation. Start with the low hanging fruit, skip LXPanel if you are not too familiar with doing translations.

And in close range of 100% is the following:
– Arabic (one string marked fuzzy in LXPanel)
– Ukrainian (one string marked fuzzy in LXLauncher, in fact it is untranslated!)
– Czech is at 87% (only LXPanel left, over two thirds are already done)
– German at 84% (missing strings in LXPanel, LXLauncher and LXMusic. The last two is small and pretty easy to finish I guess)

For the other represented languages more actions are needed to make them complete, some are close to 80% with others only done in LXMenu-data that we have imported from GNOME.

It’s well known and well documented that our session manager LXSession Lite suppport the autostart freedesktop.org specs. However, autostart spec is a term for developers and it’s meaningless for our end users. Basically, it provides a way to automatically start some applications after login.

Now this can (partially) be configured through a simple GUI – LXSession Edit. 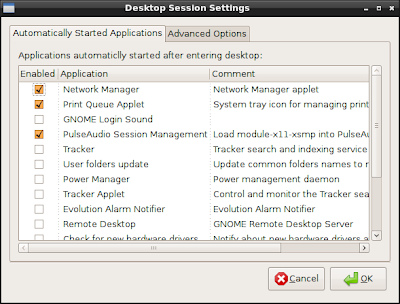 You can turn on some disabled gnome applications in LXDE with this handy tool.

Also, window manager used in LXDE can be changed with this tool, too (Only lxsession lite is supported, not the deprecated lxsession). 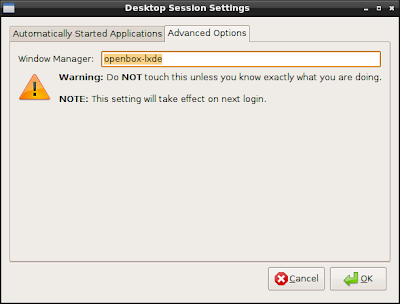 Currently adding and removing application from this startup list is not yet available, but it will be support in the next release.

The package is available here for testing: https://sourceforge.net/project/showfil…
Testers and packagers are wanted!!